What are Northern Lights or Aurora Borealis?

There are not many magical phenomena in this world like the Aurora Borealis which keep its visitors captivated by its beauty, give them a hard time sometimes to catch a glimpse of it and make them want to come again and again to catch it just like hypnosis.

The Aurora lights that occur in the northern hemisphere are usually called the ‘Aurora Borealis’ or the ‘northern lights’. Auroras occurring in the southern hemisphere are usually called the ‘Aurora Australis’ or the ‘southern lights’. These are a natural display of lights in Earth’s sky, mainly seen in high-latitudinal regions (around the Arctic and Antarctic). The Northern Lights are a result of the high speed electrically charged particles (electrons) from the sun colliding with the gases and air particles in Earth’s atmosphere such as oxygen and nitrogen. The air due to the electrons from the sun lights up in a way, like in a fluorescent light tube. The colors reflected in the Aurora depends upon the gases or air particles that are colliding up there and the altitude at which they are colliding.

Northern lights can appear in any form, shape and at any speed. From just thin and long lines to wavey lights flowing like water in the sky, to rays leaving the sky lit up from its glow. They can appear in many colors, but green is the most common and usual sight for the lights. The color may vary from green to red, purples, blue, yellow and violets. If you are lucky enough you may even spot some dancing lights. The composition and density of the atmosphere and the altitude of the aurora usually determines the colors of light emitted.

Things to know before picking the right place and time to see the Northern Lights:

The Northern lights appear near the high altitude areas of Scandinavian or Nordic Countries, some parts of Canada, Russia, Alaska, and Scotland. The main season when they appear is usually on the dark clear nights from September to April. Mostly, Northern Lights are visible in winter clear nights at around midnight (from around 11 pm to 4 am). So when you are planning to catch them make sure of the following tips:

We did witness the dancing auroras but the pictures were too shaky due to cold. How so ever much you try to keep still the hands will shake. We made the mistake of not carrying a Tripod with us. To get the best pictures you need the tripod (for a no-shaking camera) and a wide lens.

In about one and a half hours out in cold, I froze to an extent that couldn’t take any more. I did witness the dancing northern light for about an hour in various colors from green to purplish. Thankgod! the freezing paid off! After an hour and a half, I gave up on the cold and went off to the tour bus with heaters. Even after wearing like 4-5 base warmer layers and insulated jackets the winds and cold overpowered us. Make sure to wear good inner/base warm layers under your insulated & waterproof long jackets/ bodysuits/ the arctic overalls. Important stuff: Snow boots (insulated and waterproof Duh!). A few pairs of woolen Warm socks. You can find toe warmers available at many stores that works great. Snow gloves, warm headgears/ ear muffs and everything warm you can think of.

The Science behind Aurora predictions:

No one knows for sure when the Aurora’s will be visible. The aurora isn’t constant neither very predictable until a few hours before the actual display. These lights are always on the move and vary in positions and placements on a daily basis. Also, the cloud coverage or the clarity in the sky decides the visibility of the lights. Predictions for Aurora are made about 3 days in advance. Reason: average time for particles emitted from the sun to reach the earth’s atmosphere which causes this phenomenon is 3 days.

The Northern light occurs throughout the year, they are clearly visible in winter when the nights are dark. In contrast to summer when the midnight sun shines and even the nights are fairly bright and lit up. The Northern lights are also called night aurora as they commonly appear in the night when the sky is dark. During winter days on the cold coasts of Svalbard, an arctic group of islands situated between mainland Norway and the North Pole, with very low to almost no sunlight, is the only inhabited place on Earth where you can see the Northern Lights in the middle of a winter’s day. Hence, see the “day Aurora” if the skies are clear and not cloudy. Full moon nights also decrease the chances of spotting Northern lights as the sky brightens up from its light. 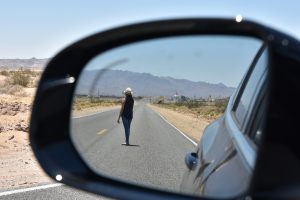 I am Isha and welcome to my blog. I am a travel fanatic, sharing my travel adventures, tips, and tricks from around the world.

Traveling to beautiful destinations around the world, usually with my favorite travel partner- my husband! Together, in about 7 months, we’ve been to 3 continents, 10+ countries, & 13 states!

For the itineraries, tips, and tricks to plan your upcoming trips check the blog posts!

I am Isha and welcome to my blog. I am a travel fanatic, sharing my travel adventures, tips, and tricks from around the world.

Traveling to beautiful destinations around the world, usually with my favorite travel partner- my husband! Together, in about 7 months, we’ve been to 3 continents, 10+ countries, & 13 states!

For the itineraries, tips, and tricks to plan your upcoming trips check the blog posts!